Filmmaking is an art, but there is also a technical aspect, especially nowadays when audiences demand special effects. Since the time of the Lumière brothers, the film industry has developed a whole arsenal of tricks that make movies magical, but which also must remain secret.

1. Extras have to be silent during filming

Although all eyes are on the main actors, extras do have an important role to play: they fill out the scene to make it more realistic. What you may not know is that when we see them arguing or laughing in the background, in reality, they have to pretend while remaining completely silent. In fact, the microphones used to film the main scene are so powerful that if extras were to speak, it would create a cacophony of sound. So extras are masters in the art of imitating a conversation, laughing, and especially ignoring the cameras. 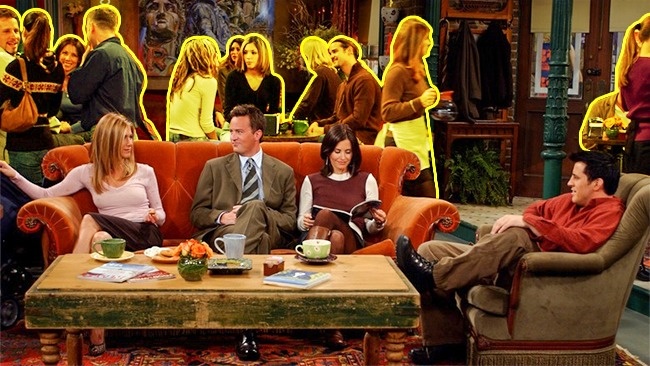 Who has never shuddered upon hearing some awful noises during a horror movie? It's the sound design team that’s responsible for creating these realistic sounds with anything they have handy. One of their best kept secrets is the use of vegetables. To recreate the sound of bones breaking, carrots or leafy greens are perfect when snapped. Viewers don’t see a thing and they shiver with anguish. Pay close attention the next time you go to the movies, and try to figure out the source of the noises you hear...

3. Some films have extended versions

As you know, directors shoot all the scenes several times and choose the best shot. The same goes for the plot, as some parts are cut during editing or may offer several outcomes. Therefore, there’s a lot of "film" that is sometimes used for more complete versions of some films. For example, The Lord of the Rings has a version that lasts 3 hours longer than the one shown in theaters. And Titanic has an extended version where the captain orders his men to return to the ship to save more passengers. These versions are too long for general audiences, but they allow fans to share the director's entire vision, or to judge the editor's choices. Watch here.

4. The infinite possibilities of using chroma key (a green or blue background) 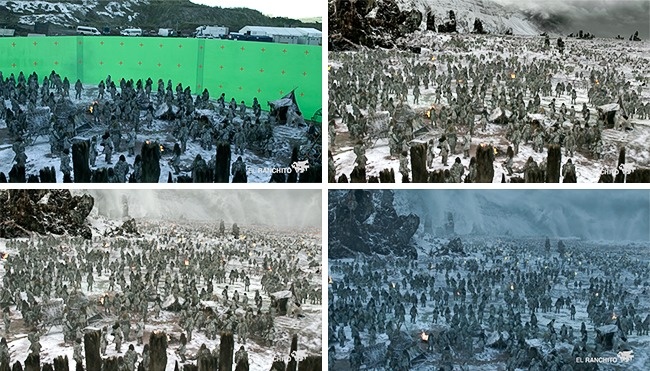 There’s no secret about how digital videos are made; we've all seen pictures of these scenes filmed on a green screen (or sometimes a blue screen, because those are the only colors that are virtually absent from human skin, so there’s more contrast). The process is quite interesting, because it allows us to "cut" the background from any scene and "paste" it onto a different backdrop. The possibilities are endless with this system, and the wildest special effects can now be done. Check out the chroma key technique used in the “Game of Thrones” video.

To avoid frightening children who act in horror films, a tricky strategy is used. The set and plot are presented to the children as an innocent game (for example, they are asked to run around with a doll, talk to a man, spill a glass of red juice...). It’s actually in post-production that all the scary elements are added (sounds, scenes, or additional characters). Everything is so well-disguised that the children have no idea what they are doing. Danny Lloyd didn’t even learn that he was in the horror movie The Shining until he was 16!

6. Models are still used in some scenes

With all the possibilities offered by computer effects, it may be surprising to learn that good old models are still used in filming. In this article, you can see some examples of sets that you will undoubtedly recognize from big budget movies.

Even the most seasoned actors get intimidated by nude scenes, which could be detrimental to a movie (especially since they are filmed up close and with few other characters, so everyone’s attention is on the main actors and their emotions are in the limelight). Everything is done on set to make the scene as easy as possible for the actors: there’s fewer technical staff, less lighting, only the actors in the scene are there, the scenes are rehearsed many times in clothing, and these scenes are filmed last, so the actors have time to get to know each other getting nude. On the other hand, some directors understand the actors being uncomfortable, such as Lars von Trier who used doubles to play the nude scenes in Antichrist.

8. Mirrors can pose a problem 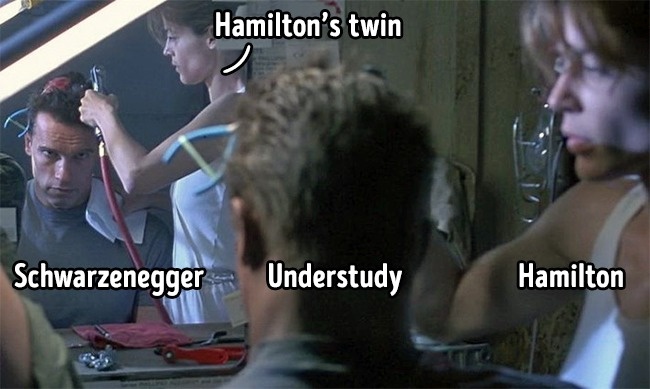 Any object that causes a reflection can be difficult for cameramen to handle, because the camera could be seen. So cameramen have to put themselves at a certain angle so they won’t be seen in the reflection. James Cameron found an interesting way to get around this in Terminator. As you can see, he used Schwarzenegger’s understudy and Hamilton to film the scene, and the actor himself with Hamilton's twin sister to film the reflection of the scene. Great art!

It’s well known that actresses starve to stay beautiful, but did you know that all actors pretend to swallow food in meal scenes? Because of the number of takes that a scene requires, if the actors really ate, they would be stuffed by the end of the shoot! They pretend, just like for all the rest of the film.

Of course actors don’t really throw up during a shoot, but do you know how it works when they have to play such a scene? They attach a bag of porridge or spaghetti around their necks, and at the right time, they just have to squeeze it out.

11. The same costumes can be used in different movies 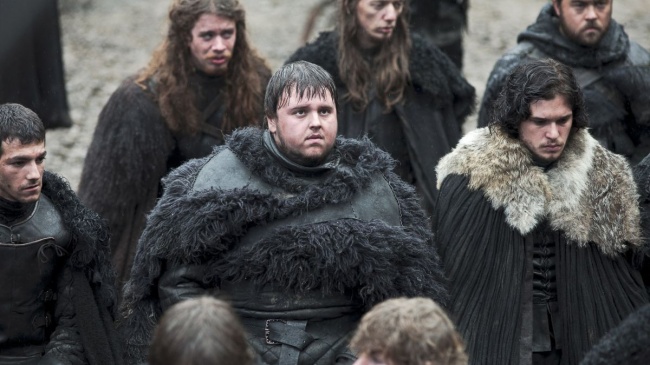 What do Pirates of the Caribbean, Hunger Games, and Iron Man have in common? A costume!  Scandalous: even Hollywood actors wear second-hand costumes! Costume designers do a great job that can make or break a movie, but it's such a difficult task that some costumes are "recycled" for several movies. Go back and check out the movies mentioned above and you’ll see. And for the record, the capes below are actually small rugs from IKEA!

In fact, scenes are sometimes so long that a real cigarette wouldn’t last long enough. Instead, they pretend or use special cigarettes. About that, some actors get so much into the role that they have trouble playing! Take the cast of The Evil Dead for example...

Have you ever noticed this interesting detail? It's done simply to provide better contrast and reflect more light to help the camera.

The big menacing gray clouds hanging heavy over the city in sci-fi movies are obtained by using a machine called "cloud tank." It's a big aquarium with salt water at the bottom and normal water at the top. Milk or paint is injected just above the salt water, and that creates the desired effect. Think of Independence Day for example.

15. Flying saucers are easy to replicate

All you need is a Frisbee to imitate an extraterrestrial flying saucer. No need to look any further, watch sci-fi movies, and you'll see it for yourself.

16. There are special pools to film epic water scenes

Very sophisticated giant pools are needed to film huge water scenes. There are some of them in Crimea that are now abandoned, but show how big these pools must be.

17. Titanic, in its own category

This film deserves a category of its own, because it required things to be created. Just look at the construction of the boat, the system used to imitate the sinking, the digital effects... It's all very fascinating!

18. Some things have to be substituted

For obvious reasons, some substances cannot be used in real life during a shoot. Cocaine is actually powdered milk or powdered sugar, and blood is really corn syrup with food coloring. Glass is imitated by sugar glass (like that made by pastry chefs), and beer is none other than apple juice. As for the strong alcohol, it’s vinegar, and ice cubes are replaced by gelatin (because it’s much slower to melt!). And finally sweat is actually rose water or glycerin.

19. Snow doesn’t melt during a shoot 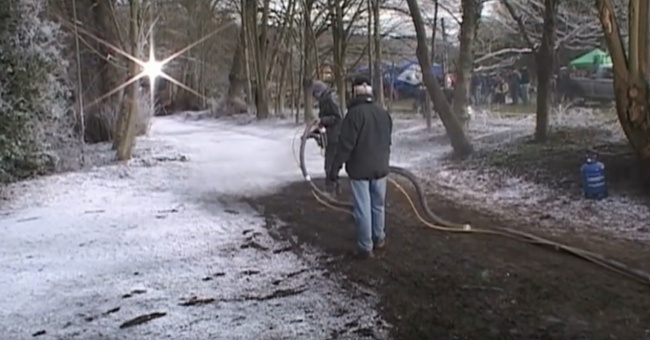 Naturally, snow isn’t immune to special effects. There’s even a company that specializes in this field: Snow Business.

The biggest secret of the film industry is that its success relies on keeping the special effects a total mystery. Making films is difficult, expensive, complicated, time-consuming, and if the secrets behind how they’re made are unveiled, the film loses its mystery and doesn’t sell as well. Personal cameras are forbidden on sets, and anyone who is discovered revealing information about the shooting will be disciplined or fired, just like the girl who posted information about the filming of Divergent on her social media profile.