But there plenty of easy ways in which we can make a positive contribution. Did you know that more than 635 million tons of waste are dumped each year into the oceans? Just by recycling, repairing and upcycling, every one of us can greatly reduce this frightening statistic.

Nowadays there are numerous start-ups that provide ecological solutions that we can apply on a daily basis. So there's no excuse for us to not at least try! To give you some ideas, here are 16 simple things we can do to help save our planet!

1. Recycle plastic in a useful way 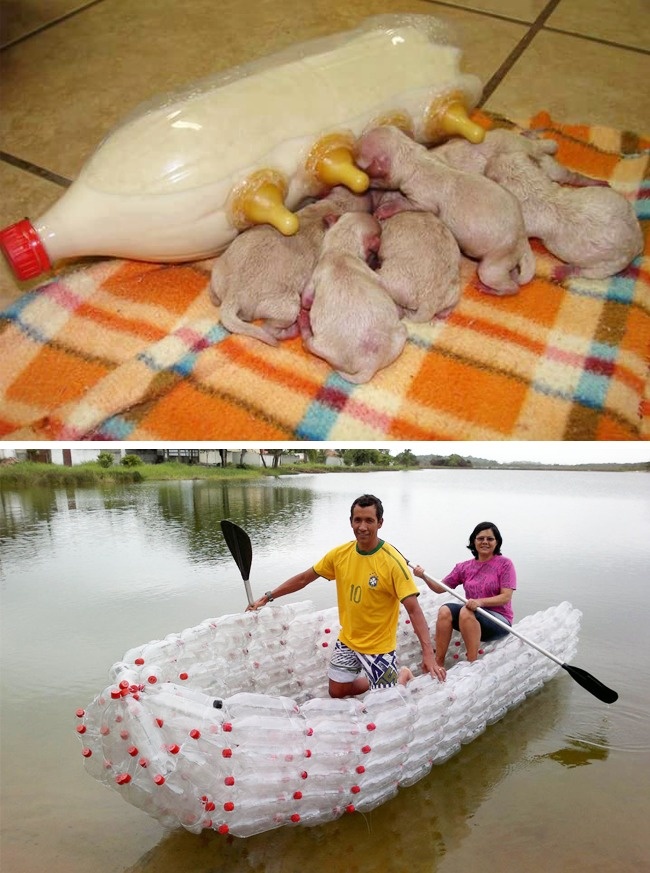 Plastic, an undeniable problem. A lot of people realize that recycling is a good way to avoid environmental disasters. Boats, nursing bottles for animals and even houses can be made with used plastic bottles!

But there are also plenty of other useful items such as flowerpots, trash cans... What about you? What could you make with used plastic bottles? 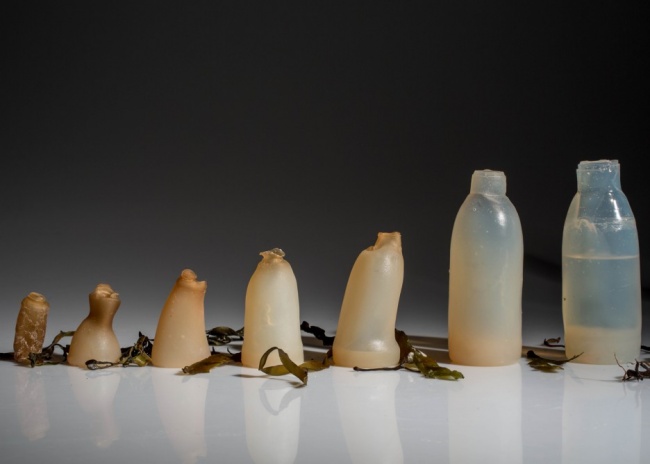 Ari Jónsson, a student at Iceland's Academy of Arts, has come up with an innovative solution! He presented his project at the DesignMarch festival in 2016 and it has attracted attention from all over the world. His achievement? He made a bottle from water and powdered agar. This bottle remains intact when it contains a liquid and will start to decompose when it's empty.

If you store liquids in it for a while they may taste a bit of algae, but the beverage itself remains completely harmless! You can also, by the way, eat the bottle if that takes your fancy!

3. Buy clothes or shoes made from recycled products 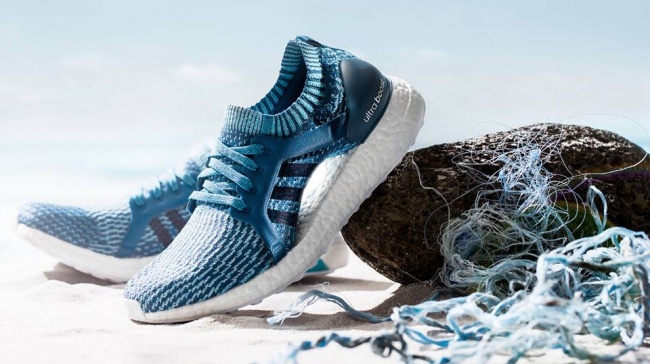 A famous brand has decided to partner up with Parley for the Oceans in order to make a difference. Indeed, Adidas has begun to make sneakers made from the piles of trash that pollute our oceans! The blue and gray colors of the first designs are an ode to the seas around us. Style-wise, you'd never guess that these shoes are made of recycled materials as they are just as sturdy and stylish as the brand's other footwear lines!

4. Only use plant-based "plastics" 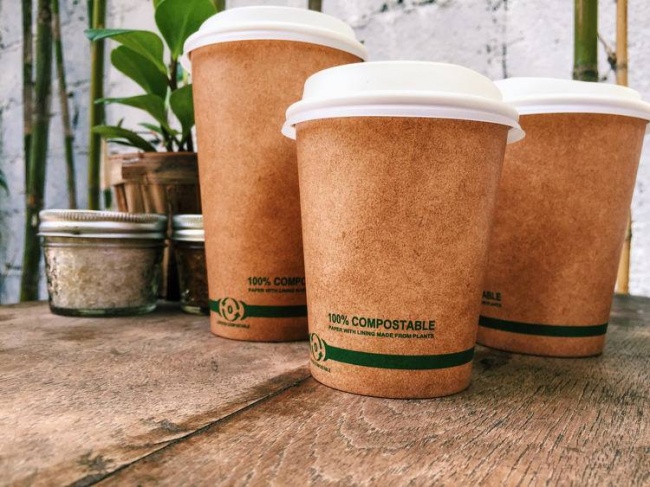 Avani, an Indonesian start-up based in Bali, is the initiator of this idea. Their long-term goal is to replace plastic with ecological and natural materials. For example, cups made from FSC-certified paper and cornstarch that can be used for compost once you've finished your drink. They also make bags made from cassava, a far more environmentally friendly product than plastic bags. What's more they decompose in 6 months or can be dissolved in water.

5. Think long-lasting rather than disposable 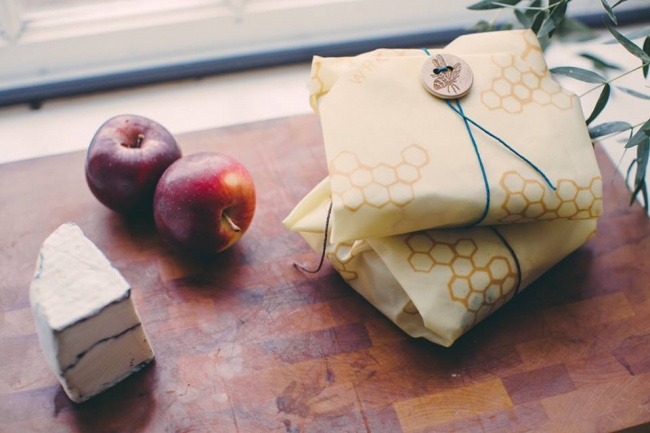 Bee's Wrap is a small company that fights plastic in its own way. They manufacture food packaging made of cotton, beeswax, jojoba oil and tree resin. You can't get much more natural than that! Some packaging is decorated - a great way to make your kids' lunch boxes more fun! The added bonus? Their products are reusable, so all you need to do is wash them! 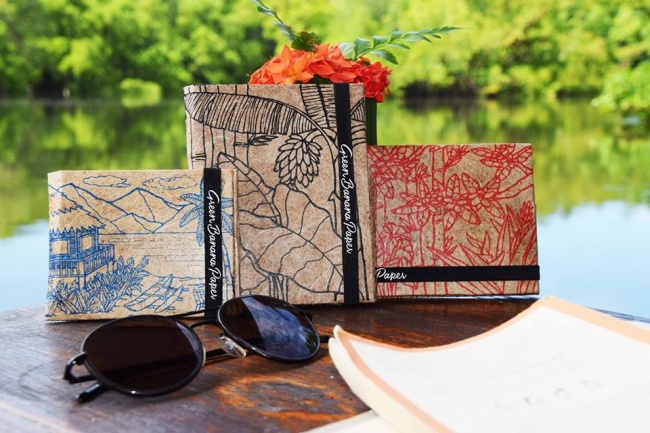 Green banana leaves are a good alternative to leather! The Green Banana Paper company makes a range of items from banana tree fibers - wallets, business cards, card holders... Although a banana tree will start to die after a harvest, a new shoot will reappear and go on to produce a new crop of bananas. This why using post-harvest banana trees has no negative ecological impact!

7. The dangers of littering nature with plastic 6-pack rings 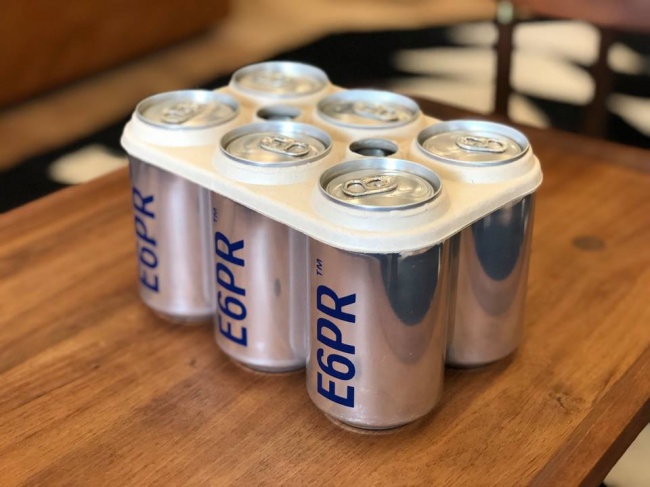 E6PR wants to save the planet's animals. And that's why they created biodegradable 6-pack rings. How many turtles, jellyfish or other animals have been found throttled or injured by plastic 6-pack rings? With E6PF, this will hopefully be a thing of the past. It only takes a few days for these new rings to fully break down and if accidentally chewed, the animal will not die: the material used is not toxic! 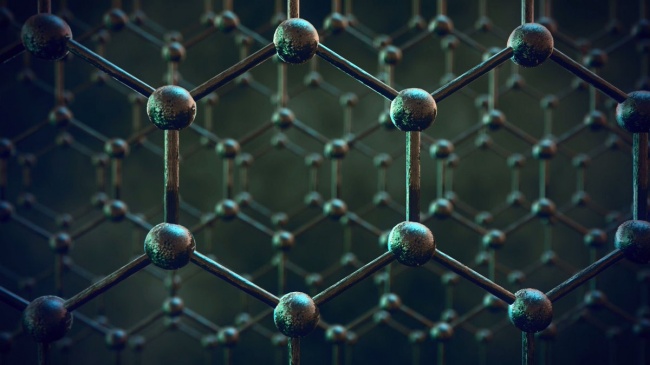 It was at the National Graphene Institute that this prototype was developed. These strange membranes are capable of filtering out coarse salt contained in water. That said, water can't as yet be completely desalinized, but scientists are fine-tuning the invention, making the filter size thinner so that salt water can be converted into drinking water.

9. Use moisture to create drinking water 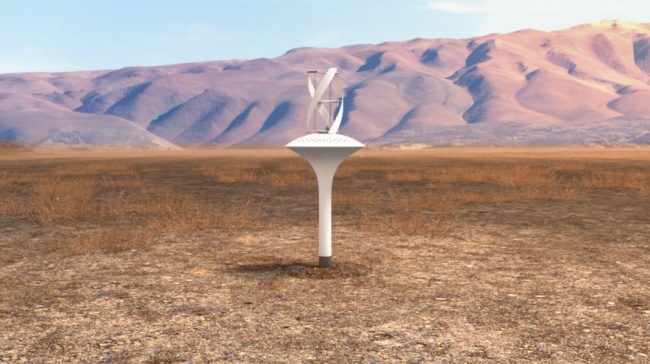 Thanks to WaterSeer, drinking water could soon be distributed to everyone. This technology makes it possible to extract the water contained in air and collect it in a container. With the current prototype, 37 liters of water could be recovered per day. According to the designers, WaterSeer works with any energy source because it only needs 150 Wh per liter to function.

10. Change the way you shower 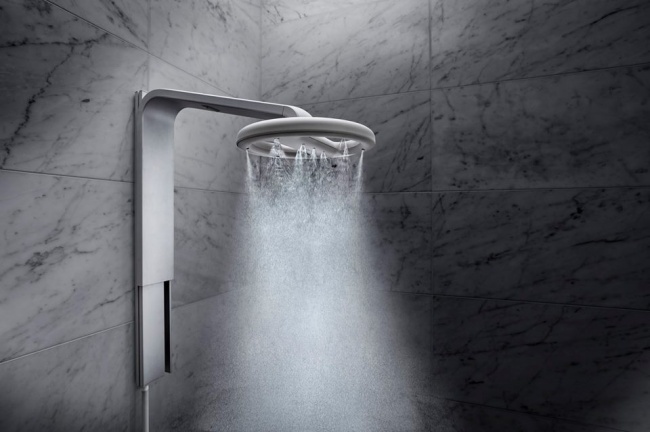 We all tend to use too much water when we take a shower. Nebia is a revolutionary shower head. It atomizes the flow of water into millions of droplets, much like steam. This makes showering more economical and ecologically sound. According to the designers, you'll save around 70% in terms of water usage! In general, 76 liters of water are used with a conventional showerhead, compared to just 23 liters with Nebia! 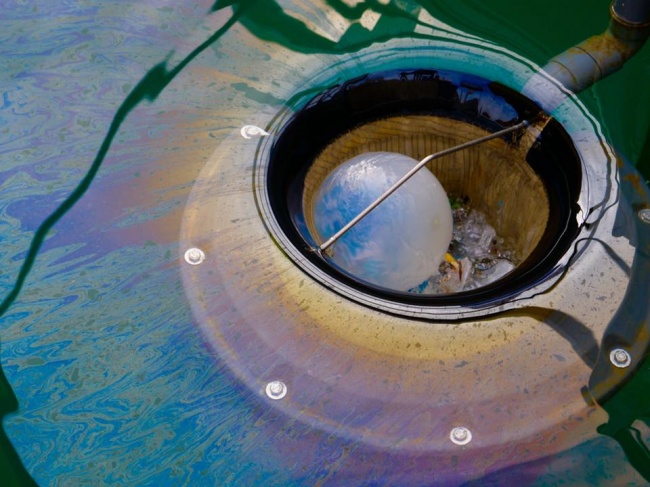 Ideally waste should not end up in our oceans, but not everyone cares. That's why the Seabin project is so important. This trash collector is immersed in marinas and ports and can collect up to 20 kg of floating waste. The principle is simple: it sucks in the trash, filters it and then the water is released. Added plus? Any oil is also contained! 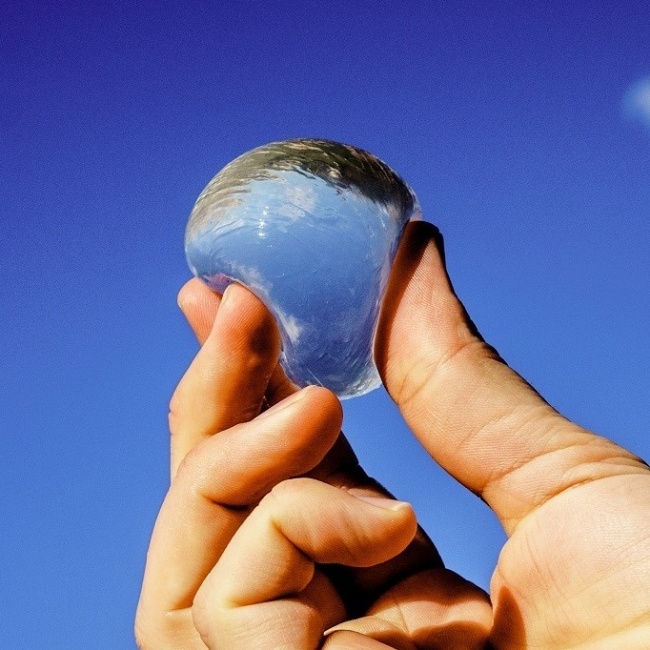 Here is another way to cut down on plastic bottles! The Skipping Rocks lab has developed Ooho, a small 100% edible water bubble! Created from seaweed, they are filled with pure water, but there is also a version for flavored water and another for alcohol; they are also developing a range of cosmetics based on the same principle! 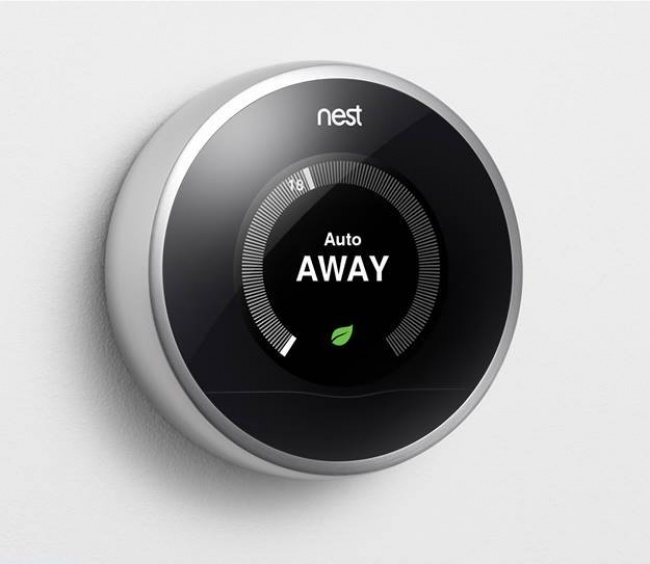 Here's Nest, the revolutionary thermostat. It is 100% intelligent and allows you to reasonably manage the temperature of your home. What's more it turns the heating off when it detects no activity in the home. Controlled via an app, you can program it to restart your heating before your return, manage your temperature and even monitor your energy consumption. This system memorizes your daily, weekly and seasonal use so that it can automatically control your usage, leaving you one less hassle to deal with. 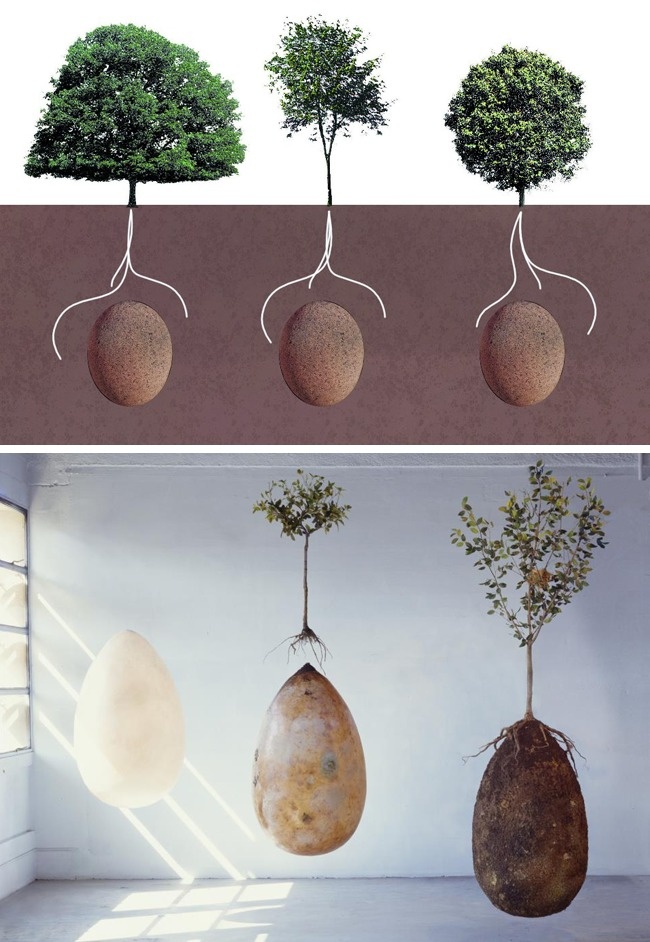 Did you know that lots of trees are cut down just to make coffins? In order to save the forests, a company has created a completely different concept that's cheaper and more ecological. Capsula Mundi offers you an egg-shaped coffin, made of biodegradable materials, with a tree seed planted on the top. Two designs are available: the egg or the urn in order to meet the right needs. Each person can then choose the tree to be planted after their death and the bereaved family can see this tree grow, while taking care of it. 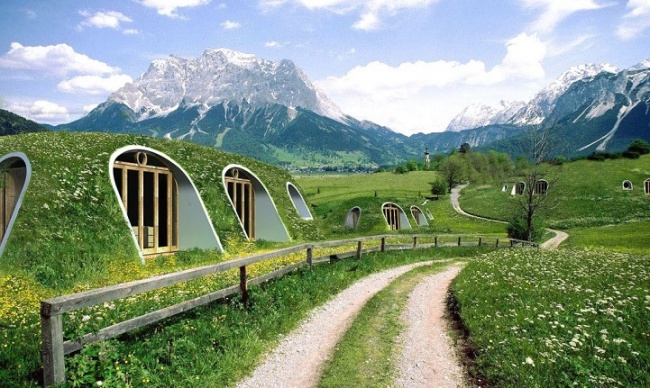 Inspired by JRR Tolkien's hobbit houses in Lord of the Rings, the small Green Magic houses are modular buildings covered with earth. These houses are not only pretty, but really well insulated! They're sustainable and do not require outdoor maintenance. In addition, it is possible to have a real kitchen garden or a large garden on the roof and walls - you can let your imagination run wild! Sand and snow designs for extreme climates have just come on the market. The bonus? It only takes three months to build and install one of these houses!

16. Prepare for a possible interstellar journey 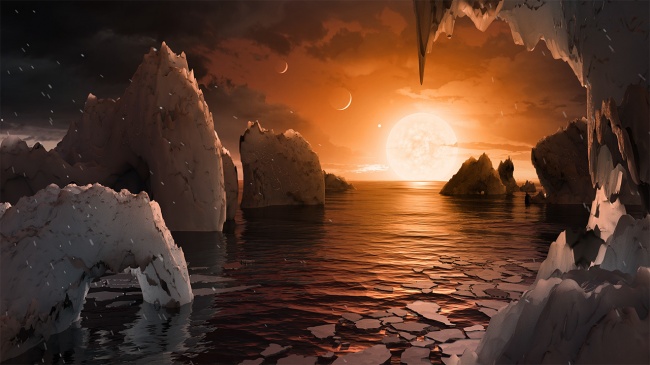 NASA has already found 7 planets similar to Earth. Indeed, they discovered a solar system with 7 planets the size of the Earth, likely to be able to accommodate human life. This system is better known as TRAPPIST-1 and is not very far away, being some 39 light-years away from our planet. According to the most probable hypotheses, each of the planets could have liquid water, which is essential to life. Being close to each other, humans could hypothetically be able to monitor what is going on on neighboring planets.