Jessica Cowan lives with her cat, Jeffrey, in Edinburgh, Scotland. Over the course of a few weeks, she noticed the 10-year-old animal was putting on weight, and for good reason too: he had found another source of food.

Jessica told the Daily Star that she'd had Jeffrey for nine years, after adopting him from a shelter in Leith, Scotland. Back then, the young cat had been left at a shelter as he couldn't handle living in his former owner's apartment block. So she took him home.

Recently, Jeffrey got quite skinny. Jessica took him to the veterinarian's, where he had a blood test and was given antibiotics.

Once the meds kicked in, the cat began to put on weight. But a little too much for that to be an explanation. It was only on the day he came home with a note hanging around his neck that Jessica realized what had been going on. 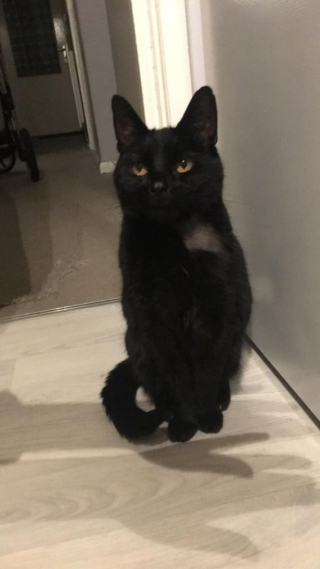 Jessica saw Jeffrey arrive home wearing a new collar. "He came home Monday afternoon with a little note wrapped around his 'new' collar. I got scared and I yelled at my mom and dad because I thought I'd let the wrong cat into the house.” she wrote.

Yet when she picked up the cat, she realized it was hers and began to laugh when she read the note: "Hi. Does this cat have an owner? He comes to me every day to eat, talk, drink and sleep. What happened to the right side of his chest? Is he okay? Lots of love."

The note was signed by Kriss, who is none other than Jessica's neighbor. Jeffrey had been visiting him every day and Kriss had been feeding him, not knowing if he already had a home. 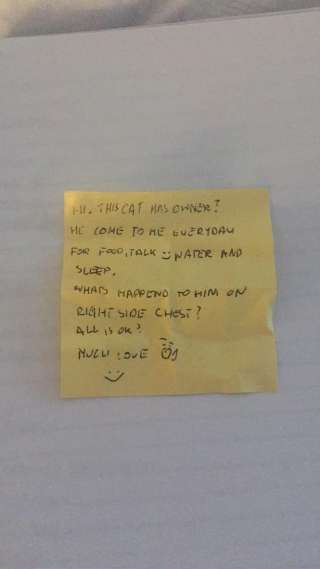 Jeffrey continues to visit Kriss, as his owner says she's happy that he brings joy to another person. Maybe one day Jessica will find out he's been visiting other neighbors too!